Home
Games
Sea of Thieves is huge, fun, and just what the Xbox One needs
Tweet Pin It 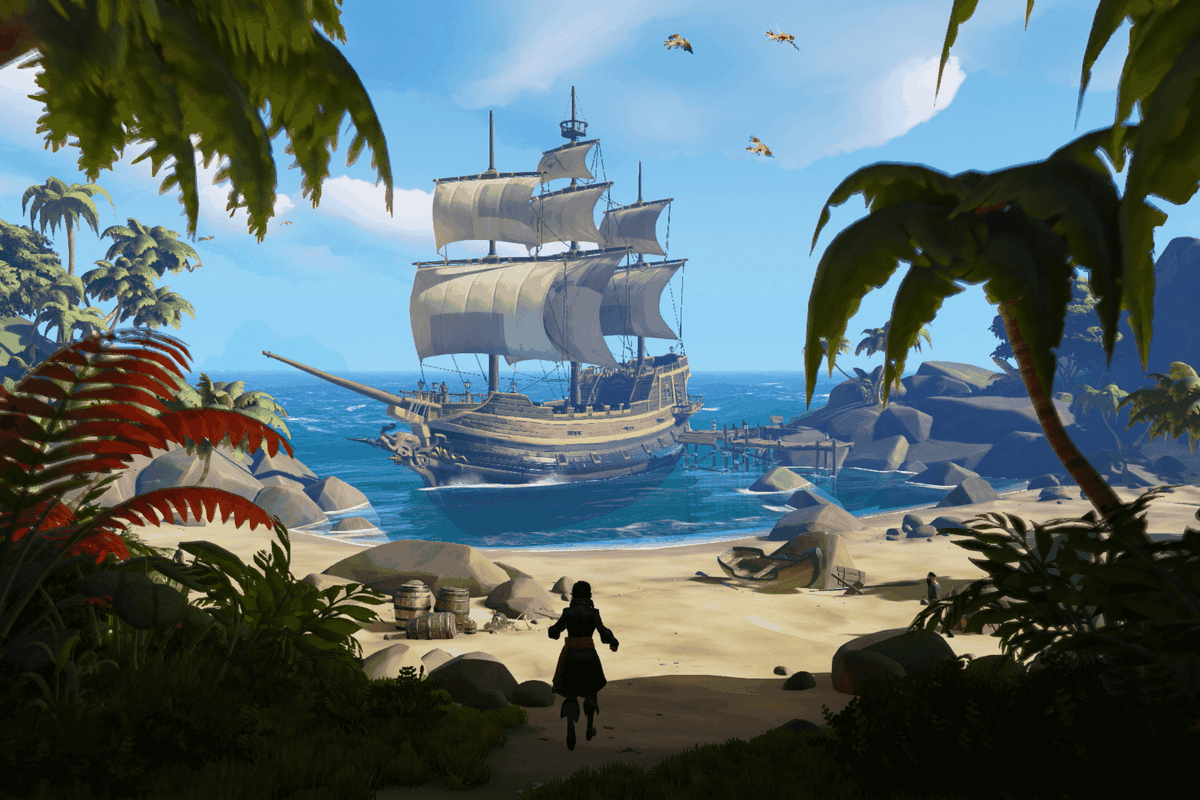 I’ve spent hours pretending to be a pirate, eating bananas in a peculiar fashion, smiling until I cried, and getting drunk to the point of dizziness — all with the help of an Xbox controller. British video game developer Rare, creator of classics like Battletoads, GoldenEye 007, and Banjo-Kazooie, has moved in a new direction with the upcoming pirate game Sea of Thieves. The studio has been stuck making Kinect games for Microsoft’s discontinued Xbox accessory in recent years, and Sea of Thieves is an impressive return to form. It’s been teased for years, and it sets sail next month as Microsoft’s big new Xbox One and PC exclusive where console players can battle PC gamers for buried treasure.

Sea of Thieves is a refreshingly ambitious game, aiming to tempt players into a big, open world multiplayer environment where you can get attacked by rival pirate ships, fired upon by skeletons from islands you’re passing by, or be snatched from your crow’s nest by giant sea monsters. It’s an experience I’ve enjoyed playing both during the beta and a visit to Rare, all while blasting rival pirate ships with cannon balls and digging up secret treasure chests from islands. It’s a game that’s had me smiling almost as much as playing Super Mario Odyssey.

Despite its impending release, Sea of Thieves still feels like a work in progress, a constantly evolving and living world. It’s the kind of online game that will clearly change over time, and it could be a surprise hit this year after months of careful game tweaks in response to community feedback. Microsoft and Rare now need to harness that early fun to steer Sea of Thieves in the right direction so it’s lively for years to come.

Teamwork and communication are key

When you first set sail in Sea of Thieves, it’s a relatively simple experience. There’s no storyline, no dedicated single player experience, and not even an on-screen HUD to distract you from your surroundings. You’re thrown into a pub on a safe harbor island with your fellow teammates, where you can get drunk (a process that will literally make you feel physically and virtually dizzy) or set sail aboard a ship. Your ship will differ in size depending on how many other players you’re playing with. If you picked the three- or four-player experience, then you’ll get a larger pirate ship, or you can play alone or with a friend on a smaller ship. But the game is best enjoyed aboard the larger four-player ship.

Sea of Thieves is designed around friendly teamwork and communication, so players can go on joint adventures together as a team. You’ll need to raise the anchor, set the angle of the sails, and lower them to gather speed. Someone will also have to steer you safely around random rocks, away from enemy pirate ships, and toward the correct island to find hidden treasure chests. There’s no on-screen map in Sea of Thieves in the traditional sense, as it’s stored on a table on board your ship. This means the person sailing the ship can’t see the map, and will need directions from someone below deck. This world map will also help your team complete voyages (the in-game term for quests), and these provide you with rewards to progress and level-up.

Quests include everything from finding treasure chests or skulls on islands to collecting resources or killing an army of skeletons. From what I played, the quests felt varied; in particular, the ones with treasure chests have challenging riddles to solve and “x marks the spot” maps to figure out before you can get loot. Each player has a lantern, compass, and shovel that will come in handy during the adventure quests. A knife and pistol will also be essential for the combat tasks, but ammo is limited so you’ll need to find some on an island or reload from your ship. Likewise, you’ll use bananas to replenish health, and you can only carry five of these at a time.

Christopher Jarvis says his motivation to make a game that …
January 6, 2018
8 min read