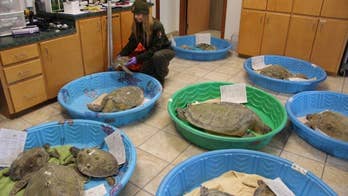 The National Park Service raced through the Gulf of Mexico Wednesday to save an estimated 500 hundred hypothermic sea turtles. The turtles are what scientists call “cold stunned” and are mainly stuck in shallow waters near the Padre Islands.

“They can’t help themselves at all,” said Donna Shaver, Texas Coordinator of the Sea Turtle Stranding and Salvage Network. “So they’re hit by boats or eaten alive.”

The 500 found Wednesday brings the total number of turtles rescued in the past month to nearly 1,000. The rescue effort is also getting help from Sea World of San Antonio, U.S. Fish and Wildlife Service, Texas Parks and Wildlife Department, Texas General Lands Office, ARK and the Texas Sea Life Center.

The current cold stunning event is ongoing, but they have become worse in recent years because of longer cold spells and greater turtle populations, according to the National Park Service.

“This may be a large percentage of all the turtles that live here, especially when it’s very severe like this,” said Shaver.

Early on New Years Day, the water temperature dropped below 50 degrees and has slowly but steadily decreased since. It was close to 40 degrees early Wednesday morning, according to NOAA. The air temperature, which has a significant impact on shallow waters, was forecasted to rise to the mid sixties by Saturday afternoon.

Sea turtles become cold stunned when the water drops below 50 degrees, or if a turtle is weak, they could become stunned at a higher temperature. They are cold blooded and cannot regulate their body temperature.

“It can actually turn rapidly because the cold stunning effects turtles primarily, that are within the inshore areas. That’s the bay systems, and they’re relatively shallow,” Shaver added. “If there’s a cold blast of temperature, because the water’s so shallow, the temperatures decrease rapidly.”

When they become stunned, the turtle’s body functions shut down and they become immobilized. They float to the surface and can be easy prey, struck by a boat, or have their eyes plucked out by birds and bleed to death.

“It is a dangerous condition. They need to be found rapidly so that they can be brought in,” Shaver noted.

The turtles found in the coastal bend of Texas are brought to a laboratory at Padre Island National Sea Shore. They are documented, tagged, and sent to a rehabilitation facility. Each turtle is medically assessed. Some can be released as soon as the waters get warmer, while others need rehabilitation and antibiotics.

“It could still take a while for these turtles to wash ashore, so we’ll continue our searches through Friday or Saturday. Just to a point of where we’re not finding additional individuals washed ashore,” said Shaver. “This is going to continue for a little while, we’re not done yet.”

Confirming a supernova explosion in the neighbourhood of our solar …
April 16, 2016
3 min read