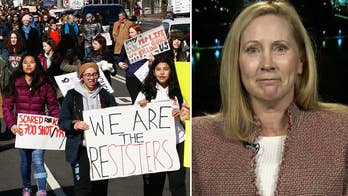 A California high school teacher was placed on paid administrative leave after she questioned if officials would support the anti-abortion March For Life in the same way they encouraged participation in the National School Walkout promoting gun control.

Rocklin High School history teacher Julianne Benzel said the punishment came after she asked her students days before the nationwide protest if it was appropriate for their school to support that protest while remaining neutral about the annual pro-life march.

But as students began walking out Wednesday, Benzel received a letter placing her on administrative leave.

The complaint, Benzel said, came from two students and one parent, and her penalty was given without corroboration from other students. She said the administration “basically targeted” her.

But the school district said Benzel was not punished for her pro-life comments.

“The teacher was not penalized or placed on leave based on her viewpoints…The district can clarify that the action was taken due to complaints from parents and students involving the teacher’s communications regarding…the student-led remembrance activities,” district spokesperson Diana Capra said in a statement.

But not everyone in the class complained about the discussion. Rocklin student Nick Wade, who chose not to walk out, agreed with the teacher’s point.

“If we were to go to the school and say something like ‘I want to walk out for, maybe, abortion rights,’ then you know they probably wouldn’t let us because that’s more of a conservative push,” Wade said.

The history teacher said she asked students if they knew about the walkout the week before, and after most of her 120 students said they didn’t, she gave a brief overview of it, adding that they should do their own research and discuss it with their parents. Benzel said she asked students if there was a double standard, giving the example: If it was an anti-abortion walkout, would their school support it?

Benzel said she hopes the walkout day prompts a larger conversation across the nation, not just about Second Amendment rights, but also the First Amendment free speech rights for all Americans.

Hundreds of schools in Oklahoma and Kentucky were forced to …
April 23, 2018
5 min read

The mother of an American college student reported missing in …
March 13, 2018
2 min read