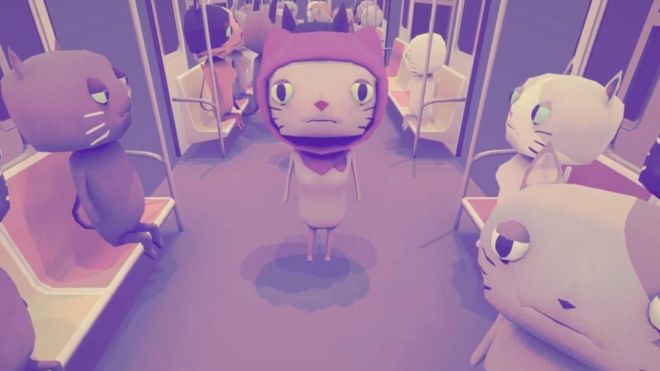 Christopher Jarvis says his motivation to make a game that tackles fake news is reenergised each time he leaves his home in New York.

“I live in Trump Tower. This is how I reconcile it with myself,” he jokes, before turning a little more serious.

At E3’s indie game corner, where the multi-million dollar budgets are replaced with games made on a shoestring, politics is the driving force behind many new ideas.

“There’s been a social political trend that we’re seeing in the games,” says Stephanie Barish, the chief executive of Indiecade, the a company that promotes independent developers, much like a film festival.

“It was kind of amazing to think how personal, and thoughtful, and political, and meaningful developers are trying to make their games.

“They’re using the medium of game making the way an artist would use their paintbrush to express what they’re thinking and how they’re feeling about the current political climate. There’s a sense of resisting against a feeling of oppression or tyranny.”

Cat in a hijab

In March Indiecade backed #ResistJam, an event billed as a creative response to the “rise of fascism” in the US and elsewhere.

Over seven days, attendees produced a number of basic but emotive games.

Several of them are on display at E3, including The Cat in a Hijab – a point-and-click mini-adventure that has you playing the role of a cat (in a hijab) who boards a subway train. You’re then faced with a barrage of comments. Some aggressive, others naively ignorant – and it’s up to you to defuse the situation (or not) with your response.

“Our hairball-in-chief is going to send you back to your own country soon,” reads one attack. Another: “He’s going to make our country great again.”

On another table, Gonzalo Alvarez is demonstrating Borders, his simple but fiendishly difficult game in which you control a man trying to run over the border from Mexico into the US.

“My Dad crossed the border when he was 17,” Mr Alvarez tells me.

“A lot of [his] stories are in the game. The border control, the helicopter that comes out later in the game.”

As you navigate your character through the map, avoiding border guards, you pass the “skeletons” of other players that have tried the game.

“My dad saw the skeleton of another human being on the way here.”

Mr Alvarez said the game wasn’t about encouraging people to try and cross the border illegally, but to demonstrate how difficult it is.

“Look at how many people die. Building a bigger wall isn’t an answer to what’s happening here.”

The decision over what’s true or not is powered by Politifact, the Pulitzer-winning fact checking organisation.

Eventually the hope is to integrate the idea into Facebook directly to help people distinguish fact from alternative fact. But the challenge that faces the app, and all of the games on show here, is in getting the title in front of the people who perhaps most need to see it.

“It might be a slow process,” says Indiecade’s Ms Barish.

“I don’t think millions of people are going to play these games and change their minds. But I think it’s empowering a group of creators, and I do think there’s enormous potential there.”

With Borders, Mr Alvarez took his idea direct to his target audience. He created an arcade booth and installed it in a gallery in Port Arthur, Texas. The presidential election vote in the area was tight – with President Trump winning over Hillary Clinton by just 0.5%.

“Putting it in an installation, that’ll bring you a group of people who may be conservative – so that’s at least a target I can market at.

“Having it in a public setting, not sitting on someone’s computer, I think really helps it become approachable.”

In a divided city, not everyone welcomed the concept of Mr Alvarez’s game.

“People wanted me to make a game to control the other side, wanting to shoot people in the game,” he says.

“To me that’s a disgusting thought process. They said they wanted me to get kicked back to Mexico.

“They might have a problem with that since I’m from New York.”

Whether you enjoyed curling up with Tetris on a Gameboy, …
January 6, 2018
7 min read