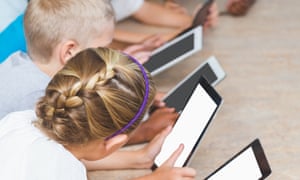 As a culture, we are finally waking up to the dark side of new technology. “The internet is broken”, declares the current issue of Wired, the tech insiders’ bible. Last month Rick Webb, an early digital investor, posted a blog titled “My internet mea culpa”. “I was wrong,” he wrote. “We all were.” He called on the architects of the web to admit that new technology had brought more harm than good.

Yet while geeks, the public and politicians – including Theresa May – grow disenchanted, schools, and those responsible for the national curriculum, seem stuck in an earlier wide-eyed era. My instinct tells me that this innocence is perverse. As a friend memorably described it, when he gave his three-year-old his phone to play with, it was as if a worm had found its way into her head.

I flinch internally when my five-year-old tells me she plays computer games in what primary schools call “golden time” rather than enjoying some other more wholesome reward; and when my eight-year-old says that he’s learned to send an email when I sent my first email aged 20, and email has since taken over my life and that of every other adult I know.

Our kids don’t use computers at home. They watch a bit of television, but we don’t own a tablet. Their school is by no means evangelical about technology, but I nonetheless feel like it is playing the role of pusher, and I’m watching my children get hooked. When they went suspiciously quiet the other day, I found them under the kitchen table trying to explore my phone. Unfortunately for them, it’s a brick.

I’m wary of sounding sanctimonious, and corroding much-needed solidarity between busy parents with different views on screen use. But when I see an infant jabbing and swiping, I can’t help experiencing what the writer James Bridle calls in a disturbing recent essay a “Luddite twinge”; and the research suggests I should trust it.

Earlier this month the children’s commissioner for England warned that children starting secondary school were facing a social media “cliff edge” as they entered an online world of cyber-bullying and pornography. According to Public Health England, extended screen use correlates to emotional distress, anxiety and depression in children. The American College of Paediatricians associates it with sleep problems, obesity, increased aggression and low self-esteem.

And not only is screen technology harmful to children per se, there’s little evidence that it helps them to learn. A 2015 OECD report found that the impact of computers on pupil performance was “mixed, at best”, and in most cases computers were “hurting learning”. The journal Frontiers in Psychology identifies “an absence of research supporting the enthusiastic claims that iPads will ‘revolutionise education’”. Researchers at Durham University found that “technology-based interventions tend to produce just slightly lower levels of improvement” compared with other approaches. Even for the head of the e-Learning Foundation, proving technology improves results remains the “holy grail”.

Education technology is often justified on the grounds that it boosts disadvantaged children, yet research shows it widens rather than bridges socioeconomic divides. The One Laptop per Child programme, which distributed 25m low-cost computers with learning software to children in the developing world, failed to improve language or maths results.

Such evidence does not dent the faith of ed tech’s proselytisers. Children need to be prepared for the future, we are told. But companies don’t want children who learned PowerPoint aged 10, they want employees who know how to think from first principles. All those mind-numbing software programs will soon be obsolete anyway. Most coding classes only teach children to assemble pre-made building blocks. Silicon Valley executives restrict their own social media use and send their own kids to tech-free schools.

Technology does not evolve naturally; programs and devices are promoted by those with a commercial interest in selling them. Ed tech is projected to be worth £129bn by 2020. This week, the world’s biggest ed tech convention, Bett, is in London, “Creating a better future by transforming education”. Google, Microsoft and Facebook are flogging expensive kit to cash-strapped schools using buzzwords such as “engagement” and “interactivity”. The traditional teacher-pupil hierarchy must be “flipped”, they say, “empowering” pupils to direct their own learning.

In reality, children tap on tablets whose inner workings are as arcane and mystical to them as any authoritarian deity – and stare, blinds down, at the giant interactive whiteboard. Children may be temporarily gripped, but their attention spans will shrink in the long term.

Tech bosses limit their kids’ time on smartphones: why shouldn’t we?

Cyber-utopianism promises magic bullets for poverty and the crooked timber of humanity. But it’s old-school solutions that really work in the classroom: good teachers, plenty of fresh air and exercise, and hands-on exploration of the real, physical world. This is even what “digital natives” themselves actually want: a Canadian study of e-learning in universities revealed that students preferred “ordinary, real-life lessons” and “a smart person at the front of the room”.

I don’t want my kids fed into the sausage machine of standardised testing and the bureaucratic “information economy”. I don’t want them to become robotic competitors to the robots we are told are taking their future jobs. I can opt my children out of RE, but where technology is concerned, I feel bound by a blind determinism. Surely we have a choice, as humans, over the direction technology is taking us, and education is the perfect illustration of this capacity. Our children turn up as blank slates, and learn to design the future. It’s time for schools to join the backlash. It’s time to think again.

• Eliane Glaser is a writer, lecturer and author of Get Real: How to See Through the Hype, Spin and Lies of Modern Life

… we have a small favour to ask. More people are reading the Guardian than ever but advertising revenues across the media are falling fast. And unlike many news organisations, we haven’t put up a paywall – we want to keep our journalism as open as we can. So you can see why we need to ask for your help. The Guardian’s independent, investigative journalism takes a lot of time, money and hard work to produce. But we do it because we believe our perspective matters – because it might well be your perspective, too.

I appreciate there not being a paywall: it is more democratic for the media to be available for all and not a commodity to be purchased by a few. I’m happy to make a contribution so others with less means still have access to information.

Instagram, one of the only Facebook-owned services that hasn’t …
August 3, 2017
4 min read
Flipkart has announced its ‘Big Shopping Days’ sale from March …
March 7, 2016
4 min read