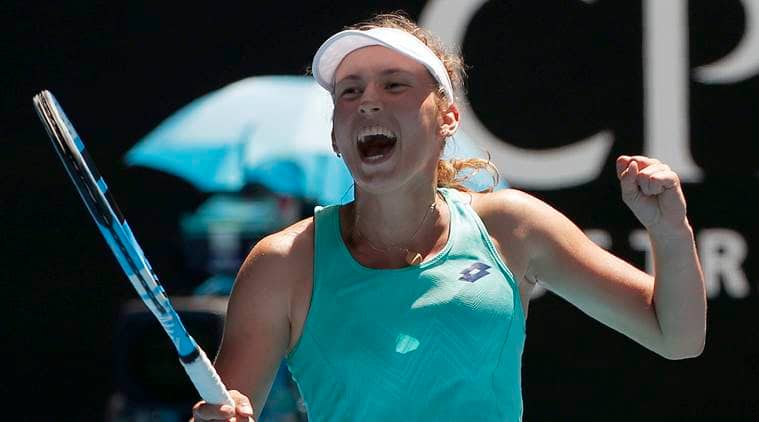 Elise Mertens produced another huge upset in a tournament littered with them when she thrashed fourth seed Elina Svitolina 6-4 6-0 to reach the semi-finals of the Australian Open at the first attempt on Tuesday.

Ukrainian Svitolina came into the match riding high on a nine-match winning streak from the start of the season but, hampered by a hip injury, was completely outplayed by the aggressive Belgian on Rod Laver Arena.

Barely putting a foot wrong over the entire contest, the world number 37 sealed the victory and her first grand slam semi-final when she ripped a 26th winner, this time off her backhand, after 73 minutes.

The 22-year-old emitted a huge shriek of delight and danced around the court in triumph before blowing a kiss to the skies and beaming at her coach and boyfriend Robbe Ceyssens in the stands.

“I’m without words, I don’t know what to say. I have mixed emotions, all good emotions,” Mertens said on court, the smile still fixed on her face.

“I gave it all today, it was a little stressy at the end. I played my game and it went well.”

The first Belgian to make the semi-finals in Melbourne since her mentor Kim Clijsters won the title in 2012, Mertens will next meet Caroline Wozniacki or Carla Suarez Navarro.

For Svitolina, who said she had been struggling with the hip injury since winning the Brisbane International warm-up, it was a third grand slam quarter-final defeat in three attempts after her two previous disappointments at the French Open.

Given the Ukrainian’s renowned mobility, Mertens was well aware that she would have to go for her shots if she was to win and she did just that to break for 2-1 at the start of the opening set with a thumping backhand return.

A second break for 5-2 put Svitolina firmly on the back foot but the world number four finally exerted some pressure and got one of the breaks back when Mertens double faulted while serving for the set.

That could have been a turning point but Mertens regathered herself and served out at the second attempt when Svitolina miscued a forehand after 41 minutes.

“I knew it was going to be tough, I tried to be aggressive, make her move, come to the net a bit more, just try to play aggressive in the court,” Mertens added.

Mertens was now oozing with confidence and an overhead volley at the net saw her break in the first game of the second set before she romped away for a handsome victory.

“She’s a great player (and) I couldn’t match it, because physically it was very tough for me,” Svitolina said.

“Going into the tournament, I had a few issues with my health. She didn’t give me opportunities. All the credit to her, because she played really good tennis and was only today, so I couldn’t really match it.”